Welcome to the Black Hills

Allow us to be your complete guide to dining, restaurants and other places to eat while vacationing in the beautiful Black Hills of South Dakota! Your travel and vacation plans come alive when you enter the majestic Black Hills with its numerous attractions, including entertainment, dining, motels, shopping, camping, gambling, and the legendary Sturgis Motorcycle Rally. Visit the awe-inspiring Mount Rushmore or view the magnificent carving of Crazy Horse. Take a trip through Custer State Park, in the heart of the Black Hills (where the buffalo roam). Or experience Sturgis, where motorcycles rule during August, time of the world famous Sturgis motorcycle rally. Whatever your vacation pleasure, Black Hills Dining web site will provide you with information on where to go and what to do to make your vacation a wonderful event. Happy vacationing in South Dakota!

Dining in the Hills

Fifty years ago at a restaurant in the Black Hills, you could have anything you wanted for dinner, as long as it was steak and potatoes. Now in the era of fine chefs, foodies and locavores, you can still get a sizzlin’ slab of beef or a familiar quick burger, but also be regaled with a grand buffet of international delights and South Dakota spins and innovations.

Since the Gold Rush of 1876, a variety of restaurateurs have set up shop in the Black Hills. Within a year of the rush to Deadwood there were gardens growing vegetables for remarkable Chinese cuisine . Within a few years there were Cornish, Welsh, Italian, Slavic, Irish, Greek, Lebanese, French-Canadian and German immigrants settling in the Hills, bringing their savory and sweet fare with them. But with a few generations of assimilation, a couple of world wars, closing of the mines, the “boom and bust” cycles of the old west and a diaspora of younger generations, the food cultures of the Black Hills flattened back into “meat and potatoes.” Mind you, they were good and hearty meat and potatoes, with an occasional spoonful of string beans and plenty of gravy, but it was pretty basic all the same.

A major exception came with the growth of Ellsworth Air Force Base in the 1940s and 50s and an influx of world travelers. They didn’t transform the restaurant scene so much, but groceries from around the world began to invade the shelves of local supermarkets. Then Julia Child came in with the 1960s and many locals were eager to try new dishes and ways of cooking. The “movement” grew and over last thirty years …the rest is history!

We are now in the midst of a culinary renaissance! There are restaurants for everyone, no matter what your tastes … from the quickest food stops and ever-moving food trucks … to more formal, elegant surroundings with more sophisticated menus. Every town in the Black Hills has some exceptional eateries offering lots of choices. All it takes is an adventurous spirit and a little scoutin’ around and you’ll find them … and be glad you did!

But wait … there’s more! The Black Hills hosts visitors from around the world and, as tastes have changed over the past decades, entrepreneurial “spirits” have risen to meet them. Vineyards have proliferated and a number of local vintners now create fine wines and award winning specialties to accompany good food or just enjoy by the glass during a break in your touring. Hand crafted beers are also served up at breweries throughout the Hills by masters who take great care and pride in their creations. Wineries and breweries are open to the public and will welcome you for a tour. Most all wineries and breweries offer free tasting. So take a look and take advantage of the many culinary treats offered in the Black Hills! Cheers and Bon Appétit! 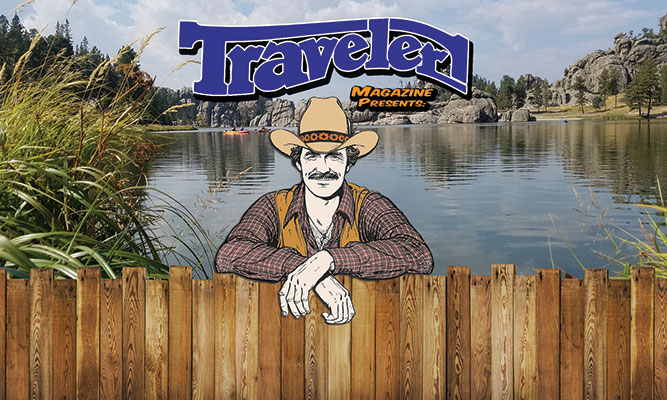 Black Hills Dining is part of the Traveler Magazine Family.

Whether you prefer print or online media, Traveler Magazine is the best place to get all of your South Dakota information.